In 1967, I watched the first settlers of Who Dat Nation fill Tulane Stadium for the inaugural game of the New Orleans Saints. Our larger-than-life city finally found itself worthy of a team in the NFL, and the collective voice of 80,000 raucous new fans told the world that New Orleans would be as serious about football as it is about jazz, crawfish and 24-hour dive bars.

The Big Easy is also serious about omens. Voodoo is a 300-year-old tradition in its French-Creole culture, and fortune tellers still do as much business in Jackson Square as artists and street performers. If fans were looking for a sign from above, it came in the first minute of the first game, when John Gilliam returned the first kickoff in the team’s history for a 94-yard touchdown. As their name suggests, the Saints must have seemed divinely favored in that opening quarter, and New Orleanians dreamed of a carefree future the way that only people who live below sea level can.

Unfortunately, that moment was short-lived. Unlike those who achieve success by starting low, reaching high and staying motivated, the team took its initial luck for granted. Not only did the Saints lose their first game, they played the next 40 years without reaching the Super Bowl. After Hurricane Katrina tore across the Gulf coast in 2005, the team couldn’t even play in its own city. Like my New Orleans relatives who stayed with me in Houston for months after the storm, the Saints had to finish their season in far-off stadiums in San Antonio and Baton Rouge.

But few things inspire like a disaster. The years of reconstruction after Katrina demonstrated the tenacity of both the city and its football team. While the Saints endured four decades without a championship following their remarkable first touchdown, it took only four years after the storm for the team to win the Super Bowl. Geaux Saints!

Just like the Saints, we in the real-estate industry have learned how to hang tough and persevere following the financial hurricane that savaged the economy. The previously feverish real-estate market – just like Gilliam’s 94-yard return – drove up expectations only to be followed by the worst market conditions in recent memory. But if the Saints’ story tells us anything, it’s that our current misfortune should only inspire us to work harder. We may have to start low, but we should always reach high. Just like the devastation of Hurricane Katrina inspired New Orleans and its beloved football team to flourish in the years that followed, we refuse to give up, remain optimistic and will achieve sustainable success in real estate once again.

We are who we are based on our history, and if our recent past is any indication of our future, prosperity is just around the corner. To recruit the best executives to lead your company toward a successful future, visit www.chrisfred.com. Start low, reach high and you’ll never look back! 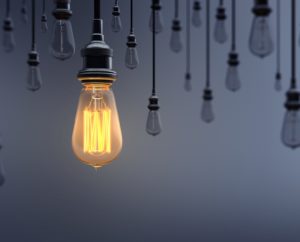